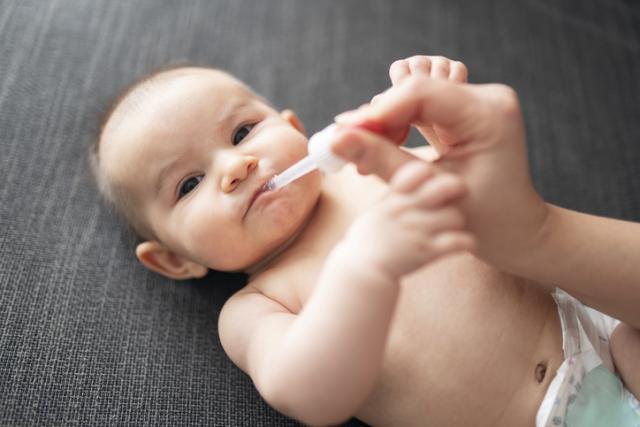 No parent wants to see their baby sick. And giving the correct dose of medicine can sometimes be confusing and difficult. “Should I use a medicine cup or a syringe?” “Is it teaspoons or Milliliters”? Studies have shown that the majority of parents make dosing mistakes that can sometimes be dangerous.

Each year, more than 70 000 children visit emergency rooms as a result of accidental medication overdoses. The confusion is due to the enormous variation in the dosing directions for children’s medicine along with the method of delivery. Dosages are often written on the medication in metric (example: give 1 mL (milliliter) between 4-7 months of age), but the cup has markings for teaspoons. This can lead to serious errors.

Studies have shown that 85% of parents make at least one dosing error when measuring liquid medicine and 1 in 5 make at least one large error, measuring out more than two times the recommended dose. The majority of errors involve overdosing, and that use of a dosing cup is associated with a four times increased odds of a dosing error compared to when an oral syringe is used.

Because of this, the American Academy of Pediatrics (AAP) and the U.S. Food and Drug Administration recommend that parents use oral syringes over dosing cups when giving medicine to babies and small children.  Also, medicine should use metric dosing with milliliters (ie, mL) rather than teaspoons to avoid confusion and dosing errors with common kitchen spoons. Parents should never use kitchen spoons to give medicine to their baby.

Medicine for infants and children usually comes in liquid preparations that can be confusing to measure out. By following these suggestions you can help your child feel better safely.