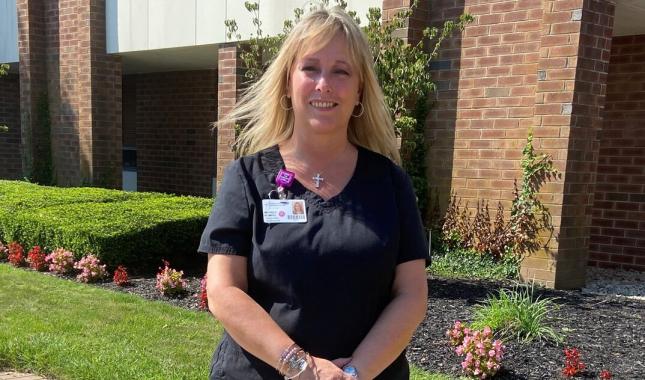 In 2014, Michele Klimpel, admissions assistant at Our Lady of Consolation Nursing & Rehabilitative Care Center, noticed what seemed like an abnormality during a breast self-exam.

The initial diagnosis following an MRI at a non-CHS facility was that she had nothing to worry about. But as she wanted a second opinion, her primary care doctor sent her to Good Samaritan Hospital Medical Center’s Women’s Imaging Center.

With a mammogram indicating something suspicious, a core biopsy was done, confirming cancer. After a partial lumpectomy was performed, Klimpel underwent chemotherapy for several months, followed by radiation treatment.

“Self-examination was a topic that was constantly discussed when I was in school, so it was something I took very seriously,” Klimpel said. “Although I was told after my MRI that everything was fine, I just didn’t feel right and knew I wanted to get a second opinion. Going to Good Samaritan’s Women’s Imaging Center was the best decision I ever made.”

The Bay Shore resident complimented the Women’s Imaging Center staff and everyone at Good Samaritan for the care and compassion she received. “No matter where I went, I was greeted with a smile,” she recalled.

Her post-surgical treatment was challenging for Klimpel. But helping her through the process was nurse Debbie Scuderi at Good Samaritan’s Breast Health Center, who became Klimpel’s cheerleader.

“She would call to check up on me and remind me to go to my appointments,” she said. “When I was frustrated and wasn’t feeling well, she would remind me of how important I was to my kids and my husband. She truly cared about me.”

Klimpel also received a great deal of support from her colleagues at Our Lady of Consolation.

“They really became my family. They would encourage me when I needed it and would help me out at work when I wasn’t feeling my best,” she said.

Klimpel also had a message for women. “If you feel you found something in your breast, don’t be afraid to do something about it,” she said. “You owe it to yourself and owe it to your family.”

Information on CHS’s full array of cancer treatment services may be obtained by calling (844) 86-CANCER or visiting chsli.org/oncology.