A Golden Anniversary Celebration at Our Lady of Consolation 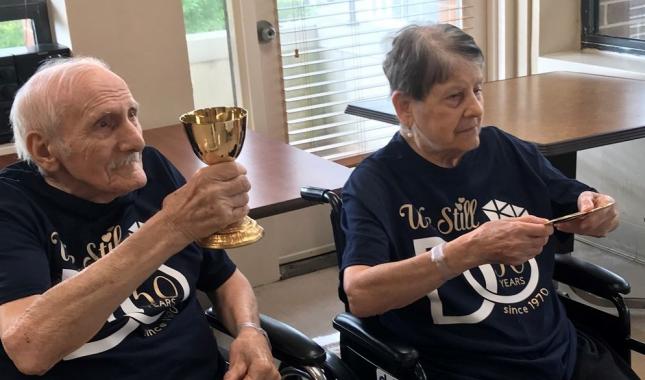 (Photo: A special 50th anniversary Mass was held at Our Lady of Consolation for residents Bruno and Rose Toscano.)

Recently, Our Lady of Consolation Nursing & Rehabilitative Care Center residents Rose and Bruno Toscano celebrated their 50th wedding anniversary, and the staff at the West Islip skilled nursing facility made sure the day was extra special.

The happy couple celebrated with a special golden anniversary Mass offered by Father Martin Bancroft, during which they renewed their vows. Additionally, at the request of Director of Pastoral Care Peggy Nixdorf, recreation therapist Patrice Warde organized a teleconference call with one of Rose and Bruno’s sons, Gerry, who invited other family members to participate to share their good wishes.

Rose, 88, with a hearty laugh said, “We have had our moments, but overall we’ve been very happy.”

Bruno, 94, had the right words about his bride: “Rose is a masterpiece!”

“We’re so happy to be a part of Rose and Bruno’s special day,” said Our Lady of Consolation’s Chief Administrative Officer James Ryan. “Even though their family could not be with them to celebrate, I’m proud of the staff for again going above and beyond to make sure the Toscanos celebrated their anniversary and that their family could connect with them virtually.”