A Life of Service Becomes a Cautionary Tale 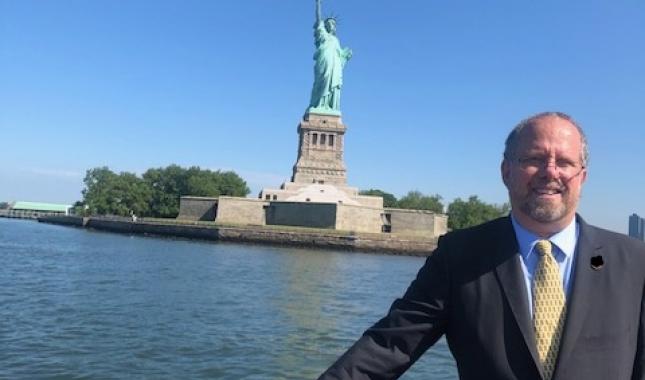 Steve Castleton has led a fascinating life filled with meaningful and interesting work, most recently focused on philanthropic support of veteran’s groups and other Long Island charities. But his most recent role might be his most important. The past ten months of his life serve as a cautionary tale regarding the dangers of avoiding medical care during a pandemic.

Covid-19 has dominated the headlines for the better part of 2020. The pandemic hit our area hard in the spring, and it is beginning to resurge as we head into the holiday season. While Coronavirus has emerged as a significant threat to public health, heart disease, cancer, pulmonary disease and other serious health issues have not gone away. Failing to heed the early warning signs of illness, however, can result in relatively minor problems becoming major, even life-threatening issues.

Steve was spending much of his time engaged in charity work focused on veterans, law enforcement and others who serve the public. His days were filled with what he describes as “running around” – delivering donations of food and supplies to hospital’s and veteran’s groups. In January and February, he began to feel more tired than usual, but he chalked it up to getting older. He decided not to schedule an appointment with his internist, Robert Sica, MD, because he “didn’t want him to tell me I’m getting older and need to slow down,” Steve said.

By March and April, his symptoms became more pronounced. He noticed increasing weakness in his leg and began dragging or swinging the leg when he walked. Still, he brushed it off as a pulled muscle in his back or the remnant of a previous herniated disc. Then, on May 8, things came to a grinding halt. Steve woke up, got out of bed, and immediately collapsed to the floor.

He dragged himself to the telephone and called for an ambulance which transported him to Good Samaritan Hospital Medical Center, where he would spend the next 14 days flat on his back.

Doctors quickly ruled out a stroke, but making a definitive diagnosis took some time and a battery of tests including two spinal taps, multiple magnetic resonance imaging (MRI) exams, brain scans and electromyography (EMG). Throughout the weeks of tests, Steve remained confined to his hospital bed, unable to walk and forbidden from having visitors due to the Coronavirus pandemic.

Once the diagnosis was made, everything made sense. Laura Donarummo, MD, Chief of Neurology at Good Samaritan, diagnosed Steve with neurosarcoidosis, a rare autoimmune disease that affects the nervous system.

“Once the doctor started going over the symptoms, I knew it had actually started in January or February,” Steve recalled. “Other than menstrual cramps, I had every symptom.”

After weeks of fear and uncertainty, Steve’s relief at learning that his condition was treatable was overwhelming.

“When Dr. Donarummo said that I would make a full recovery, I started crying,” Steve said. In addition to relief, Steve realized that ignoring his symptoms for months caused his condition to worsen dramatically.

Dr. Donarummo prescribed steroids, and Steve’s symptoms began to subside almost immediately. After 14 days at Good Samaritan, he was transferred to St. Charles Hospital in Port Jefferson for 14 days of inpatient rehabilitation to help rebuild the muscle he had lost.

“When I left the hospital, my right thigh was the thickness of my left calf. That’s how much atrophy I had,” he said.

Inpatient rehabilitation was followed by outpatient rehab at St. Charles Outpatient Rehabilitation Center in West Babylon. Today, Steve continues on his road to recovery. He uses a cane and a brace to walk but still considers himself fortunate.

Just recently Steve has returned to volunteerism by speaking to the Health Department staff and First Responders on behalf of the Army (he is a Civilian Aide to the Secretary of the Army), and thanking them for being on the front lines in the war against Covid-19 while also delivering meals to them while they are administering Covid-19 Rapid tests all over the county

While he is not yet completely ready to go back to distributing supplies to veteran’s organization and law enforcement agencies throughout Suffolk County, Steve is ready to give back in another way: by sharing his story in the hopes that he can convince others to pay attention to their non-Covid-19 health issues, especially during the pandemic.

“I am the perfect example of someone who avoided going to the doctor because I was afraid of Covid and I didn’t want to bother the doctor or hospital with something that I thought was minor,” he said. “But my condition without a doubt worsened because I did not get treatment early.”

His message to others is straightforward: “Don’t avoid it. If you’re sick, go to the doctor; don’t delay. If you have high blood pressure for a while and avoid going to the doctor, how long before you have a stroke? If my story convinces just one person to go to the hospital when they are sick, it could save someone’s life.”