Urgent Care Doctor Who Needed Urgent Care Himself Is Reunited with the St. Francis Team That Saved Him During Height of Coronavirus Crisis 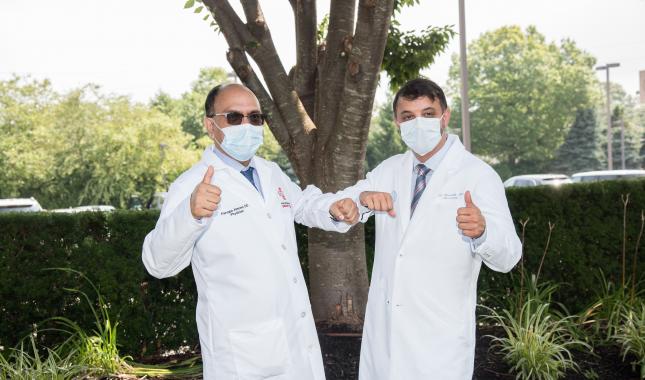 ROSLYN, NY, August 12, 2020 – August is Neurosurgery Awareness Month and Faruque Ahmed, M.D., can definitely appreciate its significance. The former surgeon was saved by a fellow surgeon from a nearly fatal brain bleed thanks to help from three quick thinking physicians, who realized he needed immediate assistance.

Dr. Ahmed was suffering from severe headaches while testing and treating COVID-19 patients at American Family Care (AFC Urgent Care) in East Meadow. But what he initially thought was stress, turned out to be a massive brain hemorrhage in the making. His medical director, Daniel La, M.D. realized something was wrong after his fellow physician was having some cognitive and gait impairments and told him he needed to get a brain scan as soon as possible.

When Ahmed failed to show for up for the scan on May 20, La contacted Nitin Mariwalla, M.D. a St. Francis neurosurgeon who provided the center with a telemedicine device if they ever needed his expertise. La then called Ahmed’s wife, told her to call 911, and get him to St. Francis fast, where Stefan Muehlbauer, M.D., Chairman of its Emergency Department, was on red alert.

“It was perfectly orchestrated and took 20 minutes to get our patient from the ER to the OR,” said Dr. Mariwalla, who performed a left-side craniotomy and evacuation of a subdural hemorrhage on Ahmed. “When he woke up from surgery the first thing he asked me was when he could get back to his patients and I realized this is what medicine is all about.”

“Doctors are usually so focused on their patients, they don’t think about their own health first, especially during these trying times,’ said Charles L. Lucore M.D., MBA, President of
St. Francis Hospital. “I commend these physicians for their teamwork in saving the life of a fellow physician.”

The urgent care MD says he still in the process of restoring the events surrounding the surgery. But he is now back at work, continuing to help patients and their families who’ve been devastated by the COVID-19 crisis.