St. Francis Hospital & Heart Center® is pleased to announce the Charles and Muriel Kornheiser Clinical Scholars Program as part of a donation by the Leonard and Sophie Davis Fund.

This clinical scholarship program aims to provide two paid research internships each year to college graduates who aspire to a medical career. Candidates from underrepresented minorities (URM) in medicine are encouraged to apply.

*URM. Association of American Medical Colleges: Underrepresented in medicine means those racial and ethnic populations that are underrepresented in the medical profession relative to their numbers in the general population. In the U.S., this generally includes students who identify as African Americans, Native Americans, (American Indians, Alaska Natives, Native Hawaiians), and Hispanic Americans. 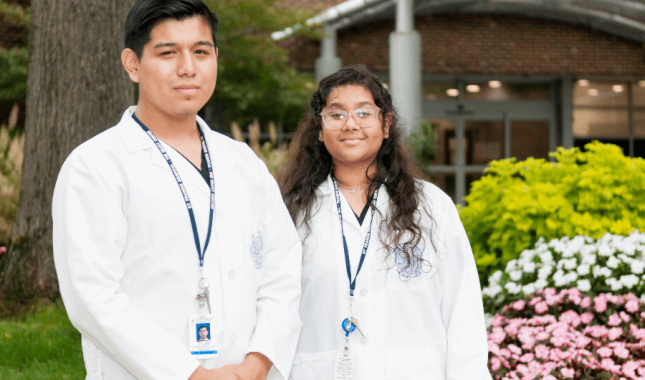 About the Clinical Scholars Program

Scholars selected for the program are paired with a physician mentor who is an active clinical and research physician at St. Francis Hospital & Heart Center®. This full time, paid position will focus on research activities and clinical observations in cardiovascular medicine at St. Francis Hospital & Heart Center®. Scholars will collaborate with a research team to contribute to scientific publications, as a result of research activities, and will attend a national scientific meeting.

Through structured lectures and journal club, scholars will learn about research methodology to strengthen critical thinking skills and to supplement their research work. Scholars will be trained to analyze various cardiac imaging modalities including Optical Coherence Tomography (OCT), CT, MRI and coronary angiograms.

They will also have the opportunity to interact with patients through their research work. Opportunities exist for the scholars to build networks of formal and informal contacts in the medical community that will provide support as they seek future career goals.

Send your completed application to: SFHscholarsprogram@chsli.org

The Kornheiser Clinical Scholars Program at St. Francis Hospital & Heart Center is the right step in my medical journey as it provides the opportunity for me to learn about cardiology, cardiovascular disease and cardiac imaging through hands-on involvement learning and research. I will carry with me the experiences I have gained and the professional connections I have fostered into all my future endeavors.”

This opportunity is amazing! It is everything I wanted for my gap year and much more. What is most exciting to me is the chance to work with great doctors in research studies while also having the opportunity to meet and help patients along the way.