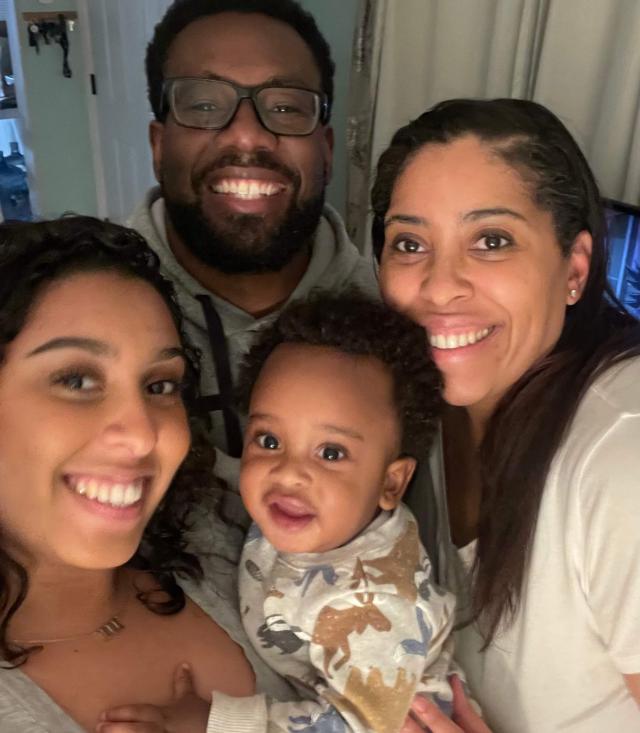 Twenty years ago, Melanie Milland-Dantzler welcomed her first child into the world, but soon after found herself experiencing an unexpected feeling—isolation. After her time at the hospital, there wasn’t any immediate relief from the feeling at home either.

“My friends basically disappeared, and two weeks after my daughter was born, my father had a stroke. My mother was doing her best to help, but she was running back and forth to the hospital to be with my father,” said Melanie. Home life eventually stabilized, yet Melanie found herself alone as a stay-at-home mother for two years. Looking back, she notes how few resources existed for mothers who were struggling emotionally. But she persevered. Melanie now calls her daughter, Serraya, her best friend. “In a way we really grew up together,” she said.

Twenty years later in 2021, Melanie was expecting her second child. Due to a prior miscarriage a few years earlier, she and her husband had significant concerns. Melanie recalls feeling a great deal of fear. Even after baby Justin was born without complication, Melanie didn’t feel right. She’d been counting on having her parents around but they sold their house and unexpectedly relocated to North Carolina on short notice. Add to this a struggle with Dysphoric Milk Ejection Reflex, which left Melanie feeling like she could cry whenever she nursed her son, and old feelings of pain and isolation began to creep back in. “I thought what happened 20 years ago was happening all over again,” she says. “It was hard. Really hard.”

Fortunately, times have changed and greater resources for mothers now exist. Melanie was referred to the Mother’s Circle of Hope program at Catholic Health’s Good Samaritan Hospital (West Islip, NY), where she found the support she needed. “Sometimes when you’re in a situation, you can’t truly see what you’re going through until you talk to other people and realize you’re not alone in it. It can also help you appreciate how things could be worse,” said Melanie.

She credits Mother’s Circle of Hope with granting her new perspectives on motherhood and how she feels in her own skin. “I realized it’s okay to be happy with who you are as a parent, that you don’t have to push yourself to be someone you’re not,” she says. “I’m learning to be a parent again, and it’s helping me feel comfortable with being a different person than I was before. It’s okay to have a different perspective on things because I’m in a different place in my life.” Shortly after joining the program, she even connected with another new mom who lived only minutes away from her.

Melanie is effusive in her praise for Mother’s Circle of Hope, saying she wants other mothers to know what it can offer them: “It gives you a place where you understand you are loved, and you can heal. You can be seen and understood. People are there for you and will be gentle with you. They’ll share their energy and healing with you.”

To learn more about the perinatal resources that are available at Catholic Health, call our confidential support line at 631-376-HOPE (631-376-4673) or email circleofhope@chsli.org.