NICU Babies Reunited with Their Caretaker as They Pursue Medical Careers 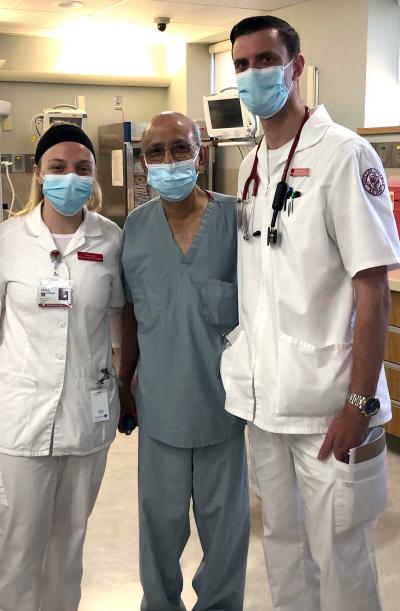 Every health care worker in a hospital’s neonatal intensive care unit (NICU) shares the same goal—to help ensure that babies leave the hospital and go on to live long, healthy lives. While they may often be left wondering years later what became of their tiny patients, one doctor’s recent reunion allowed him this opportunity, and in the same NICU where he once cared for them.

Thomas McHugh, 28, a dual-major nursing student at Molloy College, was due to begin a clinical rotation in the NICU at Good Samaritan University Hospital. Thomas’s mother informed him that it was the same NICU where he had been intubated as a newborn, being born premature 8 ½ weeks early. His mother told him to keep an eye out to see whether either of the doctors who had cared for him were still working there.

Sure enough, one of them was, Rao Bodapati, MD, specialist in neonatal and perinatal medicine and pediatrics. As Thomas introduced himself, Dr. Bodapati remembered his name and case, as well as offering a spot-on description of his mother, “A tall woman with curly blonde hair.”

“Watching Dr. Bodapati navigate around in the NICU and handle critical situations, it’s clear what a great doctor he is,” says Thomas. Today, he envisions himself working as an emergency room nurse, feeling that his calling is to be there for patients in similarly critical situations.

Hearing this story of reunion between Dr. Bodapati and one her fellow nursing students, Hailey Leitch, 24, felt compelled to share the story with her own parents. As fate would have it, her parents confirmed that she too was cared for by Dr. Bodapati in the NICU at Good Samaritan after she was born.

They proceeded to show her pictures from her NICU stay. Having the chance to see Dr. Bodapati caring for babies today, Hailey says “It’s almost like being able to see myself in the past, as a patient here. Dr. Bodapati’s compassion and care for his patients is very clear.”

Hailey says that before her rotation she was less sure of where she saw her career taking her. She feels inspired by her time in the NICU and feels she could see herself as a neonatal nurse in the future. “Helping people who are in the same position I once was just feels right,” she says.

As for Dr. Bodapati himself, he’s glad to have had the opportunity to reconnect with two of his former patients in such a unique way. “Working in the NICU is challenging but very rewarding, and it’s especially wonderful to see that two of my patients have thrived and are joining the health care profession as adults. I feel blessed to have met them again.”