Mike Manning, 58, is looking forward to running around with his seven grandkids (one on the way), helping his wife Maureen prepare for the holiday, going for a walk with his kids, riding his bicycle (as he does every morning) and just enjoying the simple things. Only a few months ago, all of his plans were in jeopardy as he developed a severe foot infection after he stepped on glass. After several surgeries at a Suffolk County facility he was told that they would have to amputate his left foot. The glass had been in Mike’s foot for at least a month but because he is a diabetic he didn’t feel the initial injury.

“If someone tells me they’re going to amputate my foot, you better believe I’m going for a second opinion. I have seven grandkids who I still want to run around with. I’m not ready to be in a wheelchair,” said Mike.

So Mike, a retired Newsday employee, did just that and connected with Dr. John Jackalone, a wound care specialist at Catholic Health’s St. Joseph Hospital in Bethpage, NY.

The doctor and his team of nurses and technicians examined Mike and determined he would benefit from Hyperbaric Oxygen Therapy treatment (HBO). HBO therapy is a treatment in which a patient breathes 100% pure oxygen while inside a pressurized chamber. The air pressure inside an HBO therapy chamber is about two and a half times greater than the normal pressure in the atmosphere. This hyperbaric—or high-pressure—dose of oxygen helps your blood carry more oxygen to your organs and tissues to promote wound healing. It also activates your white blood cells to fight infection.

“Mike came to us with five large wounds and a life/limb-threatening infection that was colonized by a specific type of bacteria that thrives in the presence of low oxygen levels. This is a reason why HBO was instrumental in managing his problem and ultimately saving his foot,” said Dr. Jackalone. “Mike’s compliance and commitment to his recovery is also why we are celebrating him today and I’m thrilled to be here with him, his family and his service dog Bo.” 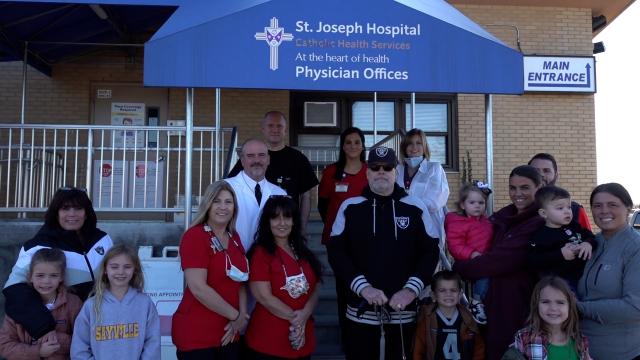 “Wound care is a collaborative effort between doctors, nurses, technicians, diabetic educators and the most important member of our care team, our patient, of course,“ said Lauren Montano, RN, WCC, program director for the Center for Hyperbaric Medicine & Wound Healing at St. Joseph Hospital. “We spend so much time together we all become like family. Seeing Mike today back on his feet is a gift — it’s what keeps us motived. We are sad we won’t see Mike anymore for his weekly treatments but couldn’t be happier for him and his family.”

“I could have survived without a foot, but I wouldn’t be living. The St. Joseph Hospital team gave me a gift, a second chance at life, and I’m forever grateful,” said Mike.

Mike is especially looking forward to the warmer months when he plans to spend time at the beach with his family, hanging around his pond, flying a kite with his kids and/or taking Bo on walks—things he took for granted before his injury.