“I’m excited to start playing basketball again soon and start back on my travel lacrosse team, so I can see those friends again," said Chloe Downey. 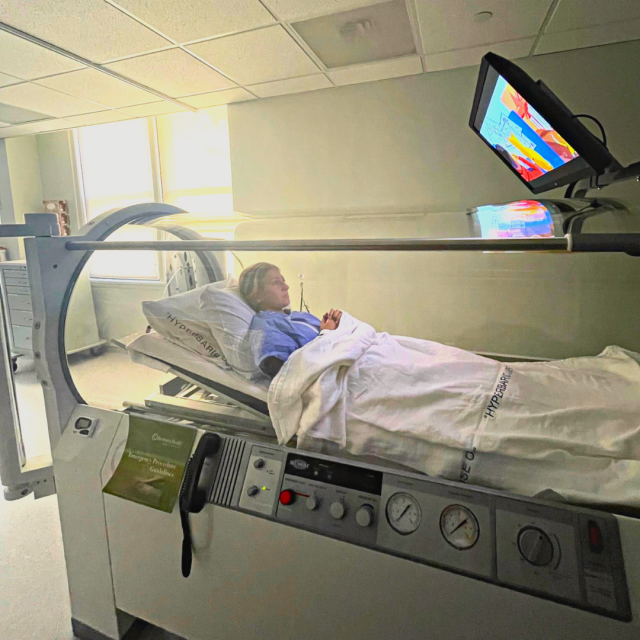 A summer day at the beach with friends was cut short when Babylon resident Chloe Downey, 12, suffered a crushed foot injury when her toe was stuck in a stationary hydraulic chest press machine. Adults on scene rushed Chloe to Catholic Health’s Good Samaritan University Hospital in West Islip, NY, where she was met by her parents Ray and Christine.

Chloe received an X-ray at the hospital, which showed that the tip bone of her big toe was broken in four places. She had also lost skin on the bottom of her toe and her toenail was nowhere to be found. Chloe underwent emergency surgery at 1:00 a.m. Her physician, St. Charles Hospital podiatrist Mudasser Javed, DPM, determined that she was a candidate for hyperbaric oxygen (HBO) therapy.

Conveniently for Chloe and her parents, she was able to find expert care at the newly opened Center for Hyperbaric Medicine & Wound Healing at St. Charles Hospital in Port Jefferson.

Within a few days of her injury, Chloe began receiving treatment in the center’s hyperbaric chamber—a fully enclosed glass tube that the patient slides into on a stretcher. “The chamber provides 100% oxygen at increased pressure, which stimulates red blood cell growth and healing—getting more oxygen to the parts of the body that need it,” said Jason.

The wound care team makes sure each patient is comfortable and has a full understanding of the treatment and how it can help. “We work together to try to achieve a better health status,” said Jason.

During each two-hour hyperbaric “dive” (as the team calls a treatment session), Chloe watched Netflix on TV or listened to music. She could move around some, as long as she didn’t lay on her stomach, so the team could effectively monitor her breathing.

“The hyperbaric technician is monitoring the patient at all times to be sure they’re safe and comfortable,” said Jason. “For an adult patient, it’s a new treatment that a lot of people aren’t used to. Especially for Chloe at age 12, it was very brave and courageous for her to go through with it.”

Chloe underwent treatment five days a week for a total of 20 completed sessions. She is now in good spirits and no longer has pain on the top of her foot. She is undergoing physical therapy at St. Charles Hospital as the final part of her treatment plan. The entire Downey family is thrilled and amazed at the results of the hyperbaric oxygen therapy. 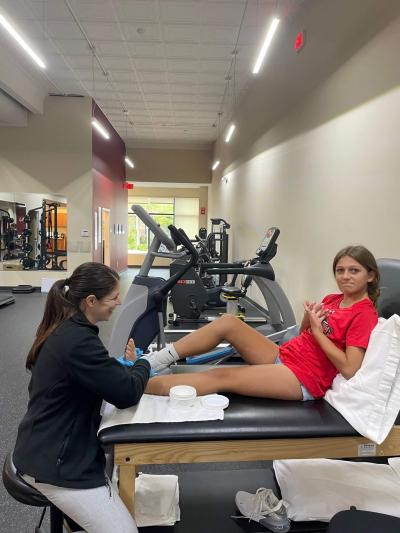 Chloe’s mom Christine credited the amazing staff who became like friends. She said they “were the nicest, most efficient, accommodating people I’ve ever dealt with.” She added: “Chloe loved them too. I can’t say enough about them.”

Chloe is an athlete and missed out on months of playing sports due to her injury and the healing process. She missed the chance to play a season of field hockey with her sister. She also missed travel lacrosse for the fall and the beginning of JV basketball.

“The hardest thing was not playing sports,” said Chloe. “I’m excited to start playing basketball again soon and start back on my travel lacrosse team, so I can see those friends again.”

“She’s young and we still have time,” said Christine.

The day after Chloe’s accident and surgery, her physician was not certain Chloe would have a toenail again. “Today, her toe looks like a normal toe,” said Christine. “We thought it was going to be mangled.”

Jason is also amazed at Chloe’s progress. “The wound looks amazing,” he said.

You can find expert care for all types of wounds at: