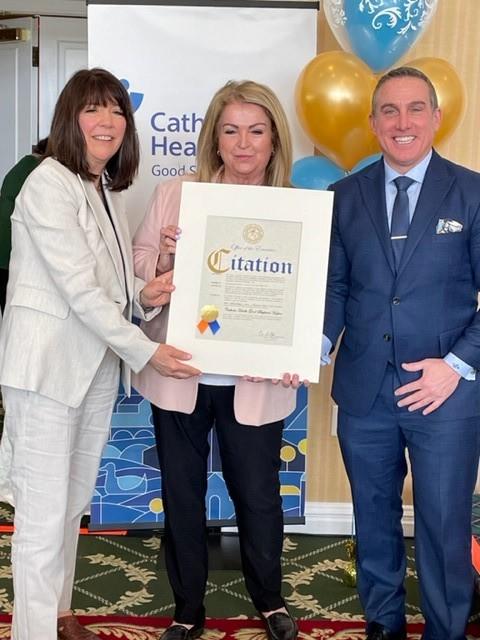 “Congratulations to Kim and the entire team at Good Shepherd Hospice,” said Catholic Health President Patrick O’Shaughnessy, DO, MBA. “The compassionate care they provide to our patients and their families in these incredibly difficult situations is part of our core mission at Catholic Health.”

The event also highlighted testimonials from Jay Schachne, MD, a long-time donor of Good Shepherd Hospice, whose late parents were under the care of Catholic Health, and Phil Alvarez, brother of Lou Alvarez, former NYPD detective and integral part of getting victims and first responders assistance for the damaging health effects of the September 11th attacks. Six days after Lou testified before congress for the passage of the "Permanent Authorization of the September 11th Victim Compensation Fund Act,” he was admitted to the Good Shepherd Hospice inpatient unit in Rockville Centre where he received physical, emotional and spiritual hospice care in his final days. A short video presentation showcasing two decades of hospice services was shown, including the nationally-recognized video about Lou’s story.

“We are extremely grateful and honored for the trust our patients and their families bestow in us to take care of them as they enter this stage of their lives,” said Kranz. “It’s a privilege for our team and one that we don’t take for granted.”