St. Francis Hospital & Heart Center® offers a full-range of diagnostic testing services. Our experts use state-of-the-art equipment and advanced expertise to ensure you receive the highest level of care. Our board-certified radiologists and supporting staff provide excellent diagnostic and interventional imaging services with compassion and efficiency.

We are accredited by the American Society for Radiation Oncology (ASTRO) through APEx - Accreditation Program for Excellence®.

We are experts in all areas of radiology. We consult with specialists in other departments so you receive accurate, thorough diagnoses that guide personalized treatments tailored to your needs and goals.

We use advanced technology to diagnose, screen and evaluate a wide range of health conditions, including those associated with the brain and spine neurological, cancer, heart and vascular, orthopedics, gastroenterology, gynecology and urology.

We offer the latest diagnostic imaging technology, including: 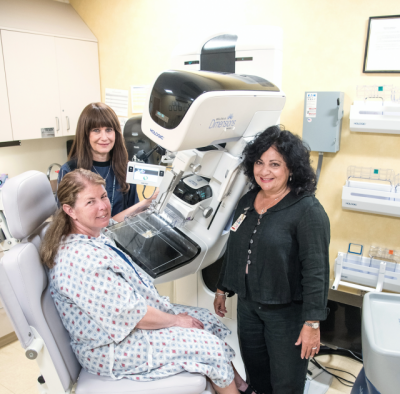 The Women’s Health Center of St. Francis Hospital & Heart Center® is a state-of-the-art imaging center committed to women’s health and education. The radiologists at the center are each board certified through the American College of Radiology. Under the leadership of Angela Capo-Granata, MD, Director of Women’s Imaging Services, our dedicated team of physicians, nurses and technologists are experts in the latest techniques that provide the earliest diagnosis of many women’s health issues. We offer the latest technology available as well as a high level of comfort, convenience and patient-focused care.

A wide range of diagnostic and interventional modalities are offered:

We evaluate women’s health issues, including:

At the Women’s Health Center, we are committed to treating each patient with dignity and respect. We understand that patients may experience fear or anxiety when undergoing a medical examination. That is why we provide same-day results for mammography and breast ultrasounds. If an abnormality is found, our physicians will discuss a number of options for further analysis, including stereotactic or ultrasound guided needle core biopsy or MRI evaluation.

Our hours of operation are Monday through Friday 8:00 a.m.-4:30 p.m. Evening hours are also available. Parking is easy and close to the facility. Most major health insurance plans are accepted.

Localization Prior To Surgical Excision. SCOUT Localization involves placement of a reflector, a tiny device about the size of a grain of rice into the breast prior to surgery. The system then uses safe, non-radioactive radar waves to detect the reflector’s location within the breast. The reflector is then activated in the operating room when your surgeon uses the SCOUT system to locate and remove both the tumor and the reflector.

Biopsy. If your mammogram or breast ultrasound has revealed an abnormality, your Women’s Center physician may recommend an ultrasound, stereotactic, or MRI-guided breast biopsy.

Breast MRI. Breast magnetic resonance imaging (MRI) is a sensitive and painless technique for diagnosing early breast cancer. It also helps determine the extent of the cancer in patients who have been diagnosed with breast cancer or those with a strong family history of breast carcinoma. Breast MRI is also used in the evaluation of possible breast implant rupture.

MRI-Guided Breast Biopsy. Magnetic resonance imaging biopsy is a highly accurate way to evaluate suspicious tissue in areas of the breast which are sometimes only seen on the MRI images.

Digital Breast Tomosynthesis (3D-Mammography) with Computer-Aided Detection (CAD). Uses low doses of x-rays to look at the breast tissue and detects cancers that may be too small for you or your doctor to feel. This technology affords sharp images with thin sections through the breast through computer generated imaging. Starting at age 40 (or earlier if you have a family history of breast cancer) you should have a mammogram every year. Early detection is the best defense.

Stereotactic Breast Biopsy. Also called x-ray-guided breast biopsy, this procedure permits precise three-dimensional positioning of a needle to obtain tissue samples. This is based on an area of concern previously noted on the mammogram.

Ultrasound (Breast/Pelvis/Sonohysterography). Ultrasonography is a non-invasive imaging technique that uses high-frequency sound waves for viewing the breast or pelvis. Ultrasound can distinguish a cyst from a solid lesion, which may rule out the need for a biopsy. Ultrasonography can also evaluate pelvic pain, abnormal vaginal bleeding, fibroids and ovarian cysts or masses.

Ultrasound Breast Biopsy. This is a highly accurate way to evaluate palpable and non-palpable suspicious masses that are visible on ultrasound. Then, with ultrasound guidance, the radiologist can biopsy the area of concern.

Bone Density Testing. A bone densitometry scan is a simple, painless examination that detects osteoporosis. When a woman goes through menopause, reduced hormone levels increase the risk of osteoporosis, a disease that leads to bone fragility and weakness. If left untreated, osteoporosis can progress painlessly until a bone breaks. These fractures occur typically in the hip, spine and wrist.

St. Francis Hospital & Heart Center® uses the most advanced technology to detect a heart condition early, diagnose with more accuracy and guide the most effective treatments. All of our procedures are supervised and interpreted by board-certified cardiologists who are experts in their particular imaging specialty.

The clinical laboratory at St. Francis Hospital & Heart Center® is a full-service laboratory located on the hospital’s lower level. Appointments are not required. Walk-in services are available during regular daytime hours. Patients should register at the cashier’s office located in the hospital’s main lobby before accessing lab services.

The facility is licensed by the New York State Department of Health and certified by:

Yes. New York State regulations require that the lab receive a written order from your physician for any laboratory services you receive.

Fasting is only required for certain tests such as glucose (sugar) or lipids (cholesterol and triglycerides and HDL). Ask your physician or call the lab for more information, including instructions about medications you are currently taking.

Your test results are sent automatically to the ordering physician. You can also make arrangements to have your results sent to any other physicians involved with your health care.

Yes. Stop at the cashier’s office located in the main lobby of the hospital. Bring identification and any current insurance information.