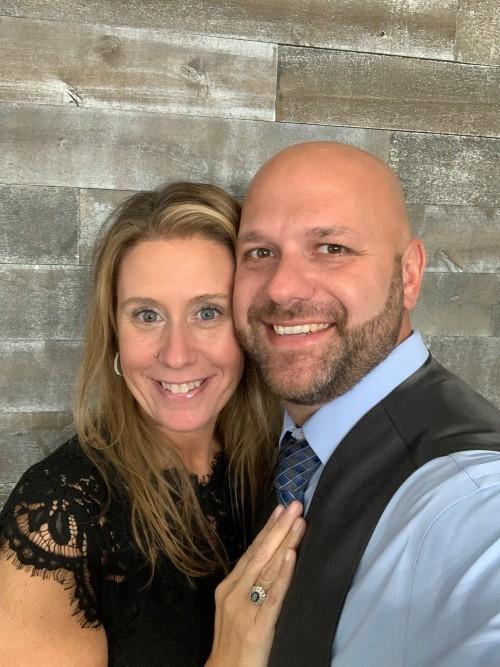 Andrew Infantino doesn’t remember the close of 2020. However, his wife, Amanda, does but may want to forget.

Andrew was fighting COVID-19. After two weeks of isolating in their home’s spare bedroom, the Nesconset resident’s condition did not improve. Amanda took her weak and dehydrated husband to Catholic Health’s St. Catherine of Siena Hospital (Smithtown, NY) where he was admitted and diagnosed with pneumonia.

“I spoke with Andrew just after he was settled in his room,” Amanda recalled. “In addition to pneumonia, he said his head was hurting badly. I told him to make sure he told the doctors.”

But Andrew never had a chance. Just hours later he suffered a stroke. Amanda was quickly informed and told her husband was being transferred to another Catholic Health facility, Good Samaritan Hospital (West Islip, NY). There, he was treated by Catholic Health’s Chairman of Neurointerventional Services Kimon Bekelis, MD.

“The doctors believe the stroke was related to COVID, as the virus can thicken the blood,” Amanda said. “The fact that Andrew was in bed for a couple of weeks likely didn’t help.”

Andrew was suffering from a condition known as extensive cerebral venous thrombosis, which occurs when a blood clot forms in the brain's venous sinuses. This prevents blood from draining out of the brain. As a result, blood cells may break and leak blood into the brain tissues, forming a hemorrhage.

Dr. Bekelis told Amanda that her husband had a low chance of surviving. Fortunately, Andrew’s condition stabilized for a period of 24 hours. This allowed Dr. Bekelis to perform a lifesaving venous thrombectomy on the then 39-year old to remove the clot.

Following surgery, Andrew’s condition improved and in two weeks, he was smiling and waving to his wife and their three sons through FaceTime calls. And after seven weeks at Good Samaritan Hospital, he returned home.

“I didn’t need to do a great deal of rehabilitation,” Andrew said. “I had a physical therapist come to my hospital room daily to help me regain my strength.”

Throughout her husband’s stay, Amanda said the physicians and nurses were “amazing.”

“No matter when I called, they would speak with me and give me updates on Andrew’s condition. They would also take the time to connect us on FaceTime as my visits were limited by COVID restrictions,” she said.

Added Andrew, “From the doctors, to the nurses and staff, everyone was wonderful. If it wasn’t for them, I wouldn’t be here today.”

“If you didn’t know my story, you would have no idea of what I went through,” he said. “I can’t thank Dr. Bekelis and the entire team at Good Samaritan for the care they provided. They saved my life!”